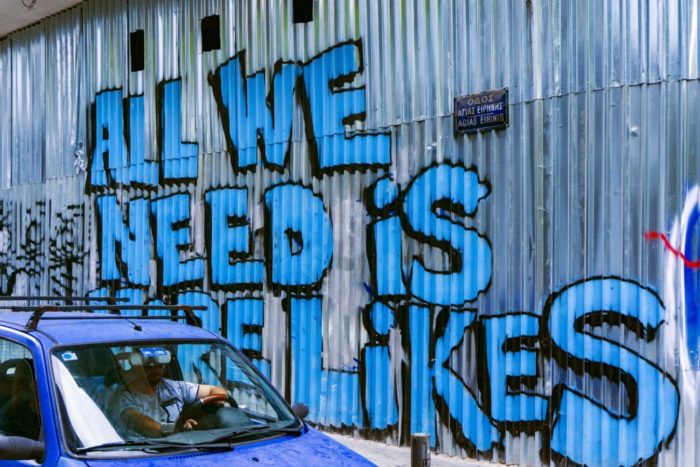 Photo by Daria Nepriakhina on Unsplash

Instagram CEO Adam Mosseri announced that the platform will start hiding “likes” for some U.S. users starting this week. This is an extension of a rolling test in seven countries around the world over the last several months. This is the moment that Mosseri shared the news. As you can hear from the audience reaction, it’s unclear how the market is going to react.

WATCH: Instagram CEO Adam Mosseri announces that the platform will start hiding likes for US audiences starting next week. It’s the latest step in Instagram’s quest to become the safest place on the internet. https://t.co/BGkMG57rdk #WIRED25 pic.twitter.com/WNTyAPVhaD

At face value, the move is commendable. Hiding likes is aimed at helping Instagram become “the safest place on the internet.” While noble in its intention, the timing is curious.

On one side, Facebook, Instagram’s parent company, is under incredible scrutiny for its ongoing role in entangling personal data, revenue and misinformation with political and social divisiveness. Facebook is famous for introducing the “Like” button to increase engagement years ago. On the other side, Instagram is widely recognized to be a platform that stokes comparative behavior, which is linked to mental health and well-being issues.

Can Instagram successfully shut off the micro-doses of dopamine and other “feel good” chemicals that are released in each instant of engagement and expect to thrive? Global test must have revealed promising insights that we’re not yet privy to.

We are all Accidental Narcissists Now

We all do it. Likes make us feel better, albeit it temporarily. But that’s also what’s part of the problem. The more we feel it, the more our bodies, and our psyche, crave it.

At first blush, someone who gives

is likely well-intended. Someone who receives

is also made to feel special in the moment. That was the idea anyway. Social reciprocity can be very healthy in the right contexts. If only health and wellness were part of the mix early on.

Beyond feeling good, a growing body of research now shows that likes are linked to unproductive and even harmful behaviors. Our brains are rewired and emotions and intellect are frazzled as a result. At varying levels, we become addicted attention, rewards, and validation. We crave it and actively seek it. Likes give us a feeling of popularity and meaning. They stoke vanity and self-centeredness. But when tied to social proof and staged experiences, the overall product opens the door to social comparisons, which can (and does) trigger feelings of low self-esteem, negative body image, irrelevance, and more.

Facebook is a publicly traded company. Its main product is advertising (and data) and they’re both tied to our attention spans…or what’s left of them.

Could removing likes curb the escalating monetary power of digital influencers on the platform?

Needless to say, “influencers” are freaking out.

Influencers after all, are individuals who built engaged communities around their personal brands and have learned how to land lucrative endorsements with advertisers (brands) to feature products in paid posts. They’ve outgrown their “internet famous” roots to become the new celebrity spokesperson. Likes, to influencers and marketers, are also a form of currency, along with followers. The more social capital one has and demonstrates, the more brands can plug into network effects that extend the brand’s reach among desired audiences.

Depending on their online stature, influencers can earn hundreds to thousands and even millions per paid post. For instance, it’s reported that 21-year-old Kylie Jenner earns $1.27 million per sponsored post.

Even though mental health reasons are a stated driver for the change, Instagram is also losing billions in advertising revenue. If advertisers spend money directly with influencers, they’re probably not investing in the platform directly or if so, it’s only a fraction. That takes revenue away from Instagram, which brings down Facebook performance, which leaves shareholders exploring new ways to spark monetization.

For those truly entrepreneurial influencers and also creative marketers, I’m sure influencer marketing will find new ways to evolve and thrive…even for the better.

The Dark Side of the Attention Economy

At the heart of the matter, social media continues to affect our physical, mental, and emotional health and wellness, and very little is being done about it. In fact, most of us don’t realize or care to learn what’s happening. The more time we spend on social media without healthy checks and balances though, the greater the effects.

Did you know the average teenage girl spends between 6-10 hours a day on social media? When asked, one teenager couldn’t answer why. “Whenever I got bored, I just opened Instagram. What am I doing!?” she exclaimed.

This is something that I’ve long studied and shared in my work. It’s also why I wrote Lifescale. I too needed help.

Here’s what I can say: the hype about intentionally hacking and manipulating the attention economy is very real. While our attention has always been a battleground, modern and controversial design techniques, did much more than get us to use apps more.

As a digital analyst and anthropologist in Silicon Valley, I’ve had access to many of the entrepreneurs and investors going back to the days before social media was social media.

Social media, online gaming, and apps are real-time examples of worldwide social engineering. The goal of these apps is to push you outside of your existing norms and values. Again, while not new, the extent of how this is done and how we react is also changing our internal chemistry, rewiring our brains and sending us into uncharted biological and emotional territory.

Instagram, Facebook, Twitter and the like reward users with fleeting social validation and variable intermittent rewards. These persuasive design mechanisms were designed to change our behavior and form new rituals that seemingly incentivize us to share, consume and engage more. After all, this is really about attention economics. Our attention is a currency. We earn and spend it. The more of it we give to any one platform, the more it can monetize.

Through persuasive design, our behaviors are pushed in new directions. We’re encouraged to consume more content. We’re sharing more of our life than ever. We’re influenced by the activities and images of those we follow more than we realize. It’s rare when we’re fully in the moment. We don’t allow ourselves to observe or experience boredom. How we think, feel, and act in the real world only continues to evolve as a result of our online activities. And, this is all normal. The more we use, the more we change.

And that’s just it, we’ve all, in our own way, become users…literally.

The dark side of likes and other forms of manufactured micro-doses, affect us far deeper than anyone was telling us or leading us to believe. Studies show, and also my own research has found, likes, followers, and comparative behaviors, activate more than FOMO. Today’s social standards also feed stress, anxiety, mental loneliness, low self-esteem and unhappiness. Over the last decade, as social media became the new normal, a rise in depression and suicide has also dramatically spiked, especially among young adults.

The great bargain we’ve made as users of this epic social engineering experiment is that we signed a social contract that trades attention and long-term wellness for momentary relevance and escapism.

The great bargain we’ve made as users of this epic social engineering experiment is that we signed a social contract that trades attention and long-term wellness for momentary relevance.

No matter who you are, your IQ or EQ levels, if you use a smartphone and many popular apps, you, like me, are affected. Doing nothing makes things worse. But knowledge, purpose, and intentionality put our lives in alignment with tech in a more productive, happier, and creative direction.

Perhaps there’s a lot to learn from TikTok. The community is wildly positive. The community at large promotes only healthy and uplifting engagement. It never took money for political advertising. People feel good even after closing the app. It’s a culture shift for Instagram and wake-up call for all of us.

So, yes. Removing likes is touted as a positive investment in the psychological and emotional welfare of its users. Removing the semblances of popularity in everyday engagement could also promote healthier peer-to-peer engagement (and also marketing programs). Either way, this could be the beginning of something good for everyone. The question is Instagram can hold on to its user-base and inspire it toward more productive engagement and growth? I hope so. Because in the end, we, as users, are still the product and our attention and data are still primary revenue generators.

The post The Beginning of the End of Likes: Instagram Expands Tests Removing Likes from Public View to U.S. appeared first on Brian Solis.

A Beginner’s Guide to Retargeting Ads

A Beginner’s Guide to SSL: What It is & Why It Makes Your Website More Secure